I realized today that I was a cultural refugee. My culture is rich in traditions, art, stories and heros. But I don't live in that culture. I am a foreigner in the culture I live in. It is not my home. I really don't know where the home for my culture is either. But, very rarely I get to meet someone who is from my home culture. Someone who knows my traditions and the stories and the heros. Such a person is Glenn Eames.

Glenn set out to bicycle around the world in 1982 on his Holdsworth Mistral. He flew to Amsterdam and cycled through Europe and then headed south to north Africa. He caught a boat to Greece and cycled in Asia Minor. Then to India, Thailand and China ending up his tour in San Francisco two years later. After another 3000 miles in the U.S., he landed in Vermont where he started work in a bike shop. 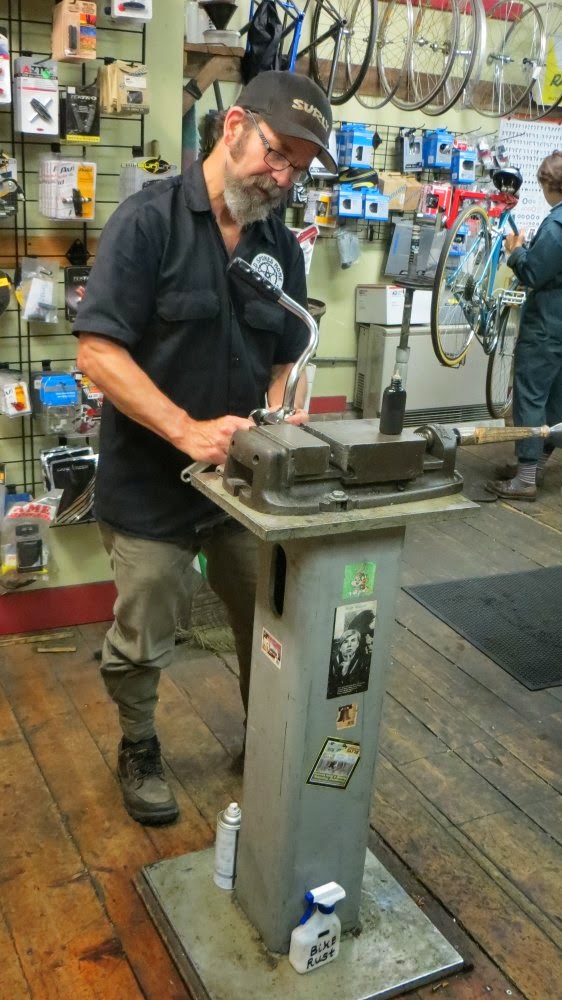 After 14 years, he opened his own shop and named it the "Old Spokes Home." 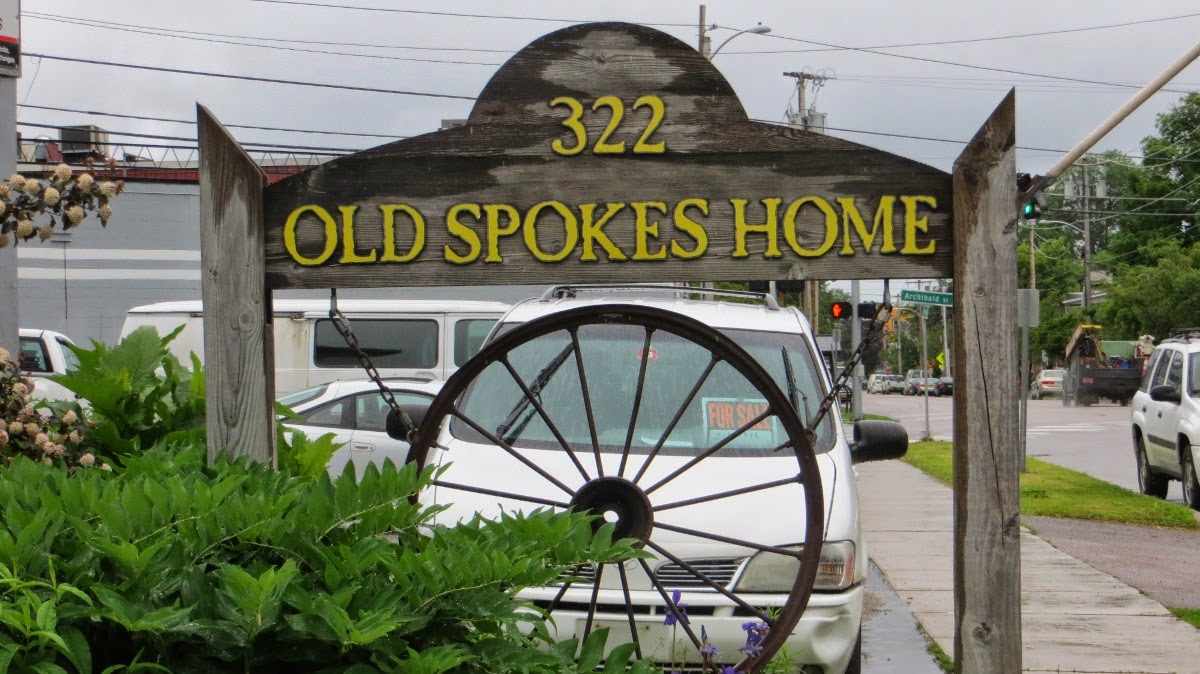 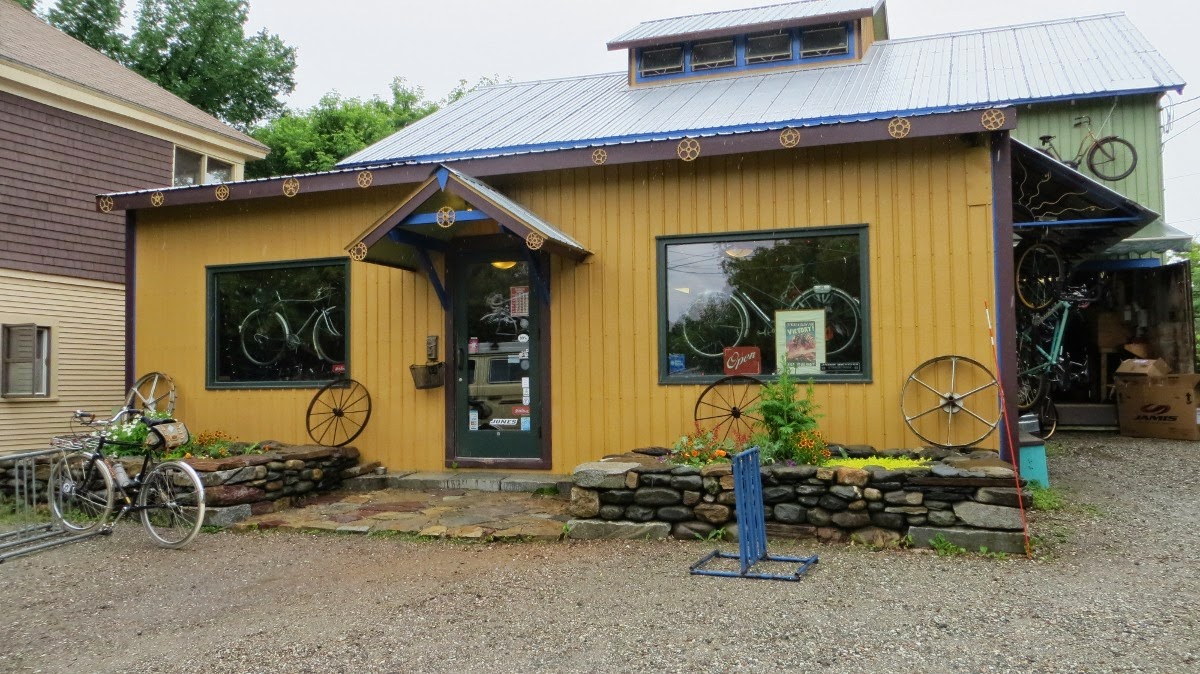 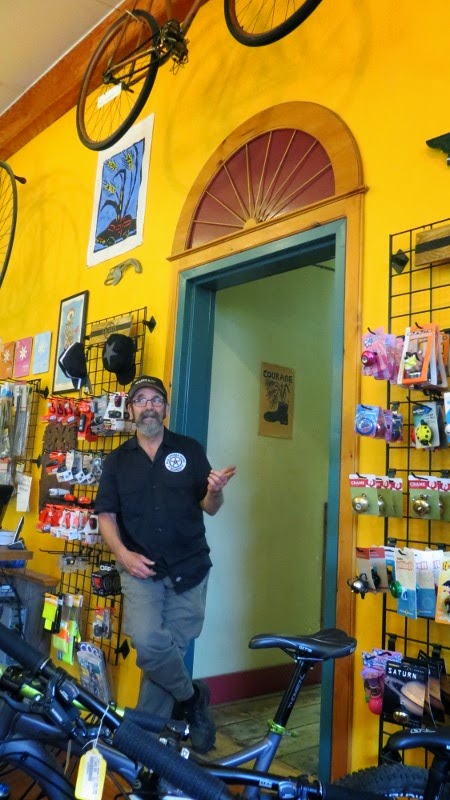 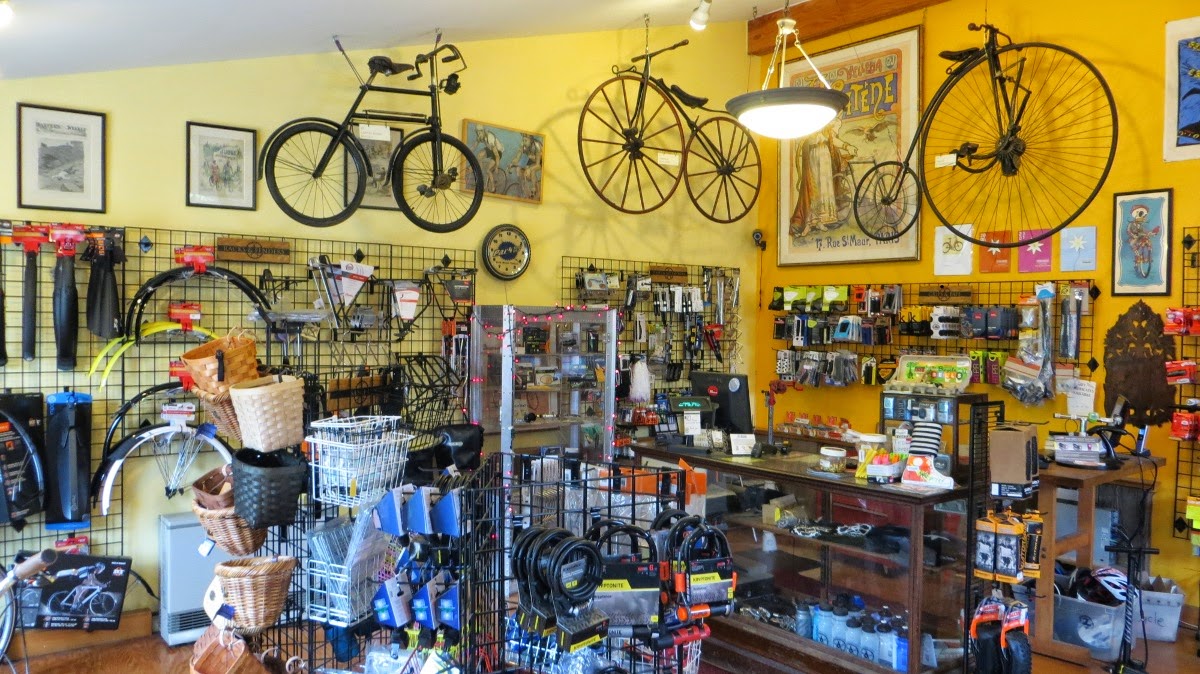 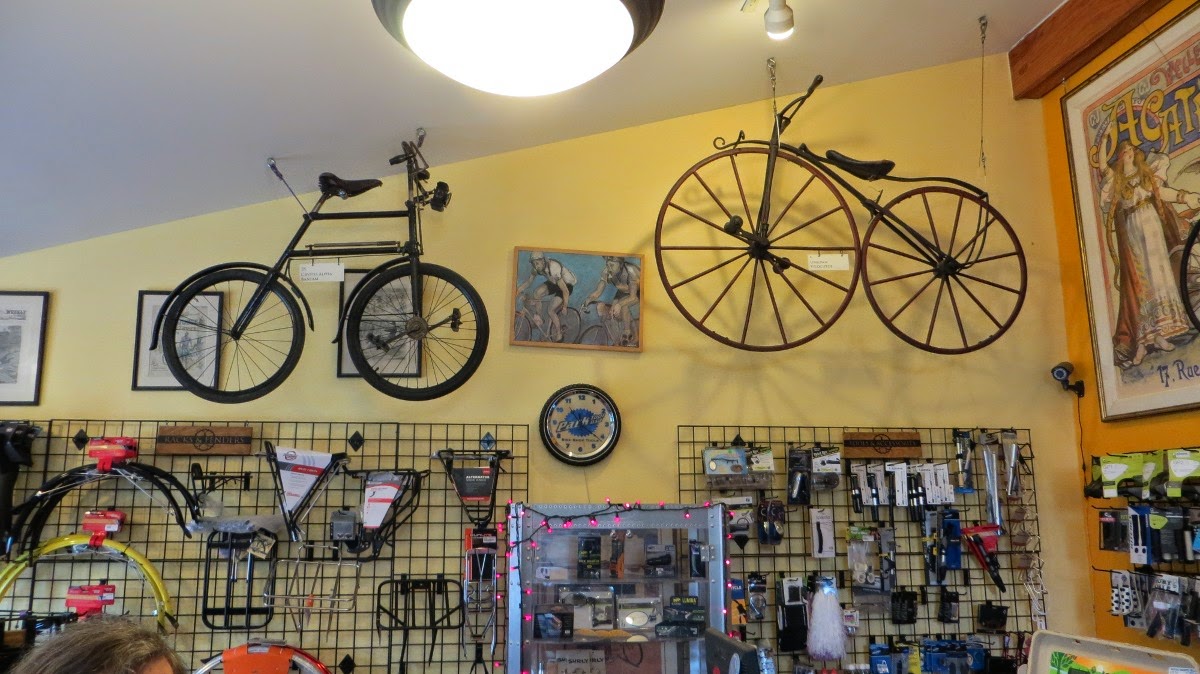 He sold used bikes at first and fit right in supplying the fixie crowd until the interest peaked. 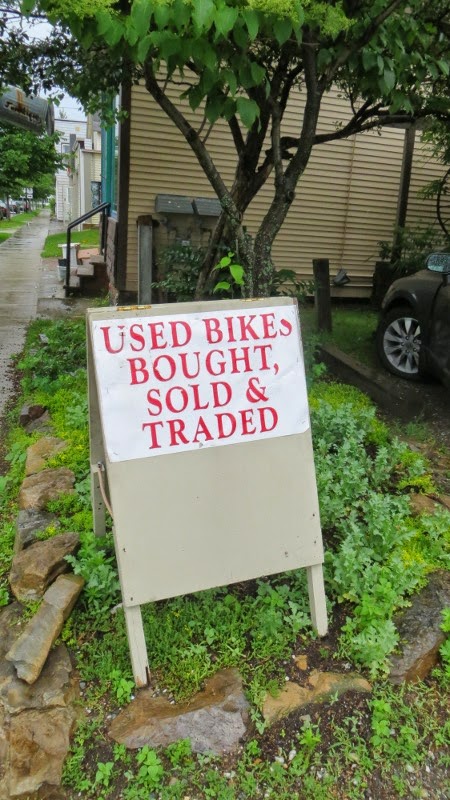 He grew and sold new bikes, too. 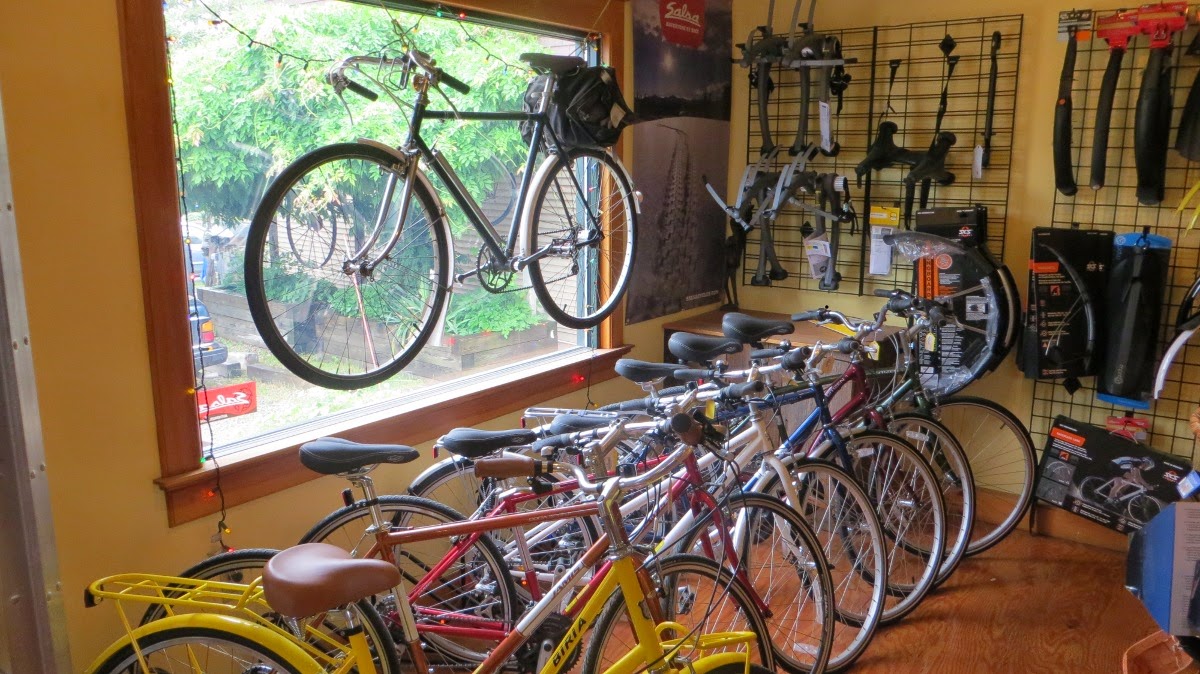 He chose the Jamis brand because they still believe in steel. He also sells Surly and the "Long Haul Trucker" is a touring bike he can get behind with his personal interest in bike touring. But he says he "never met a bike he didn't like" and so sells Fat Bikes because they are where the bicycle is now being invented. He says this because he knows the bicycle has been continuously reinvented since the beginning.

And Glenn can prove it. 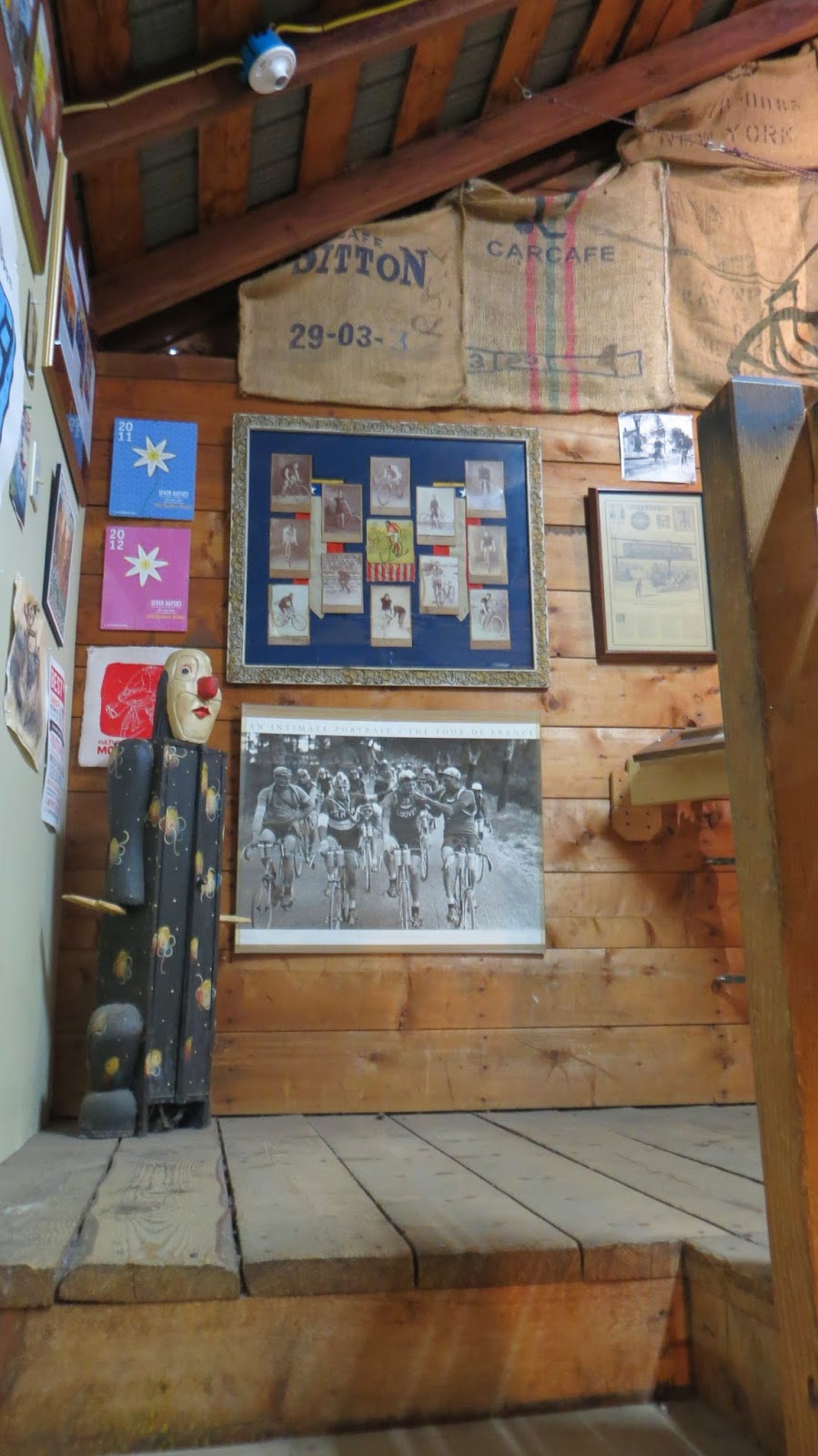 Upstairs in the "Old Spokes Home" is part of his incredible collection of bikes. He has created a high-class museum of bicycles that chronicle the beginnings of cycling with dozens of bikes, just part of his collection, made all before the turn of the century. 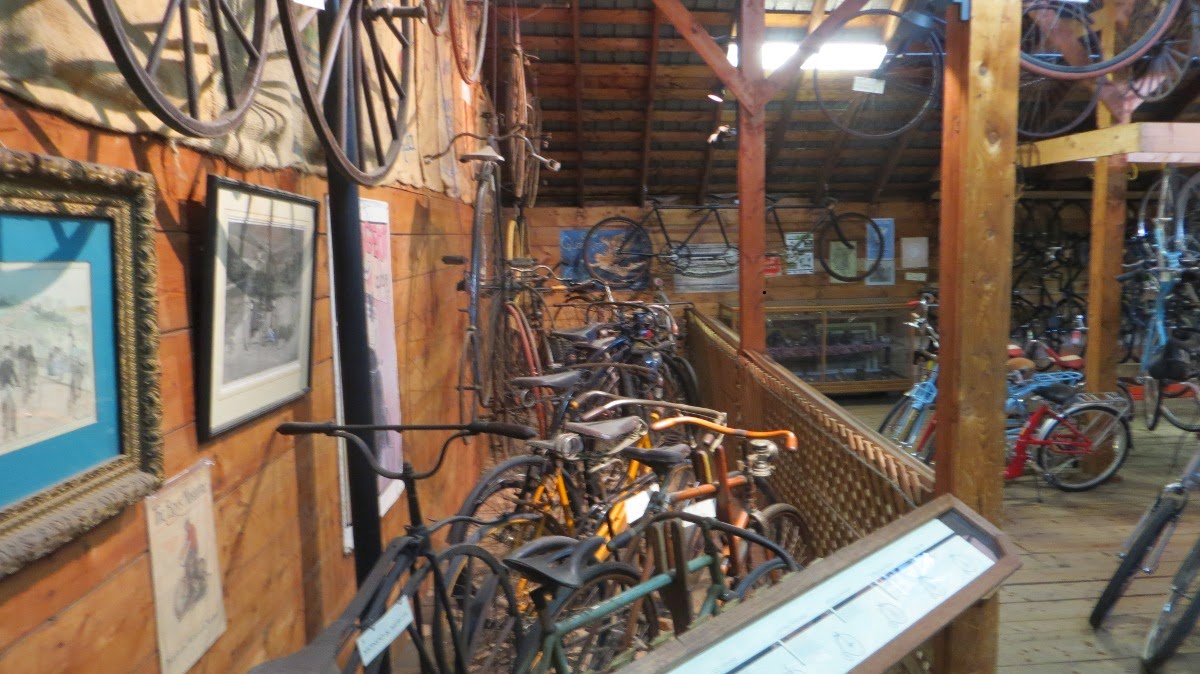 The pre-1900s bikes are organized to illustrate the evolution of bicycle design and innovation in the bicycle's first 40 years. 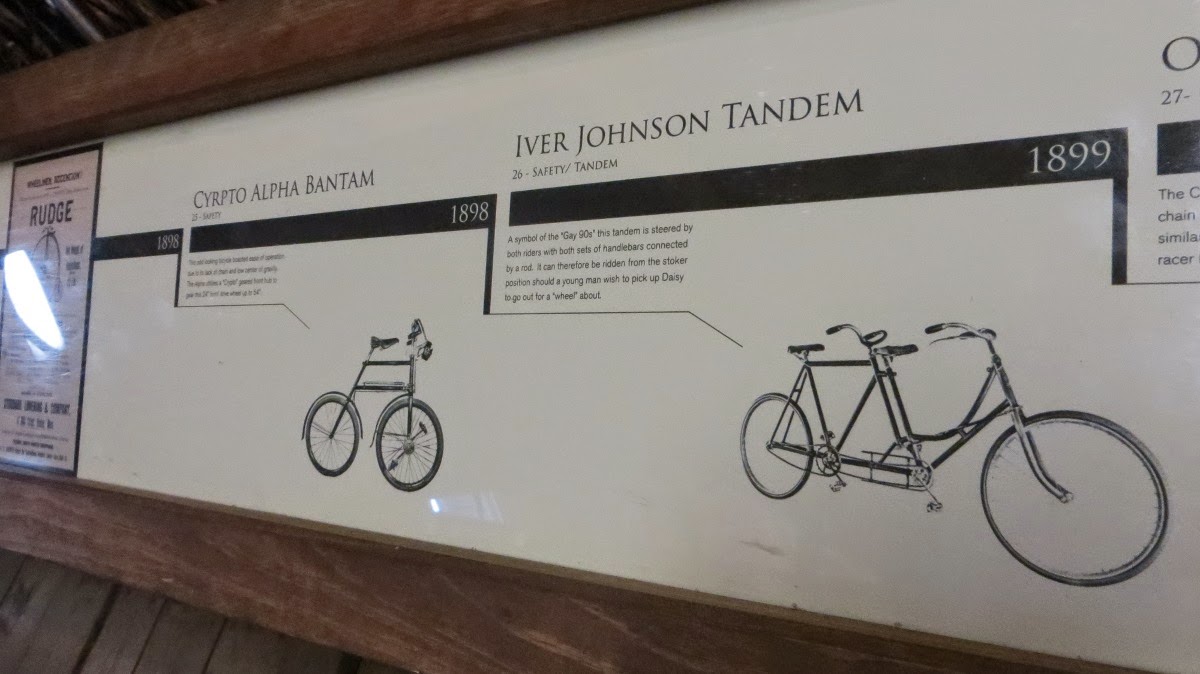 He has created professional looking plaques that tell the story from the earliest days of the hobby horse to the rise of the high wheeler and the safety bicycle. 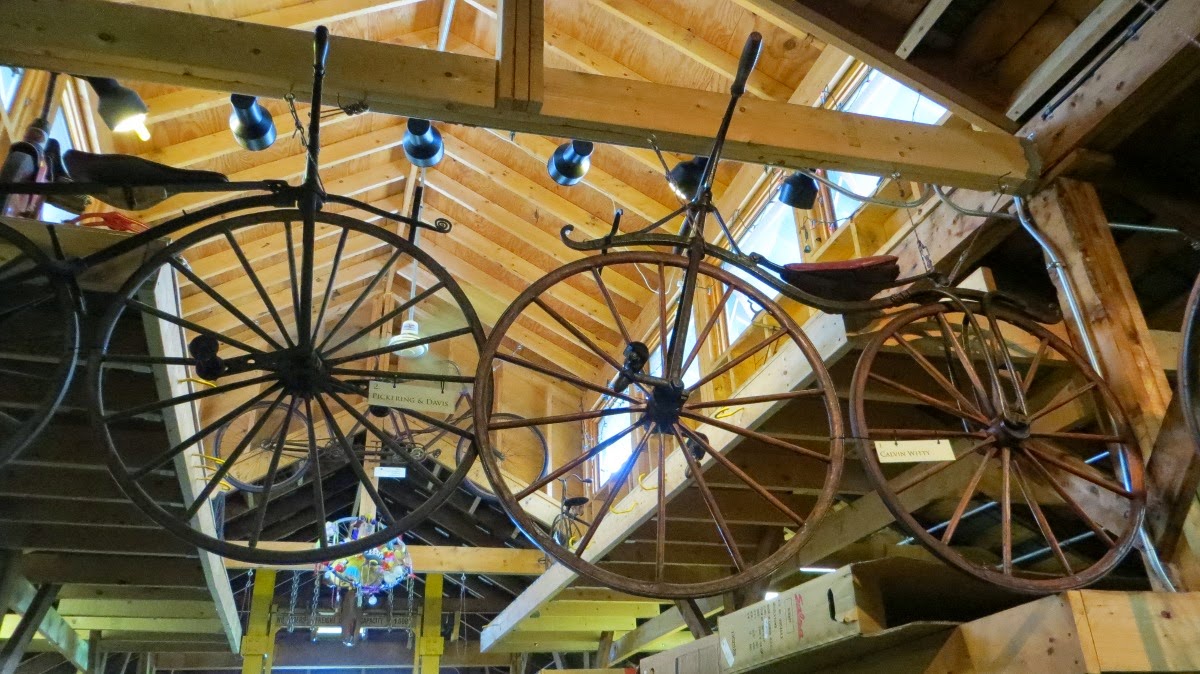 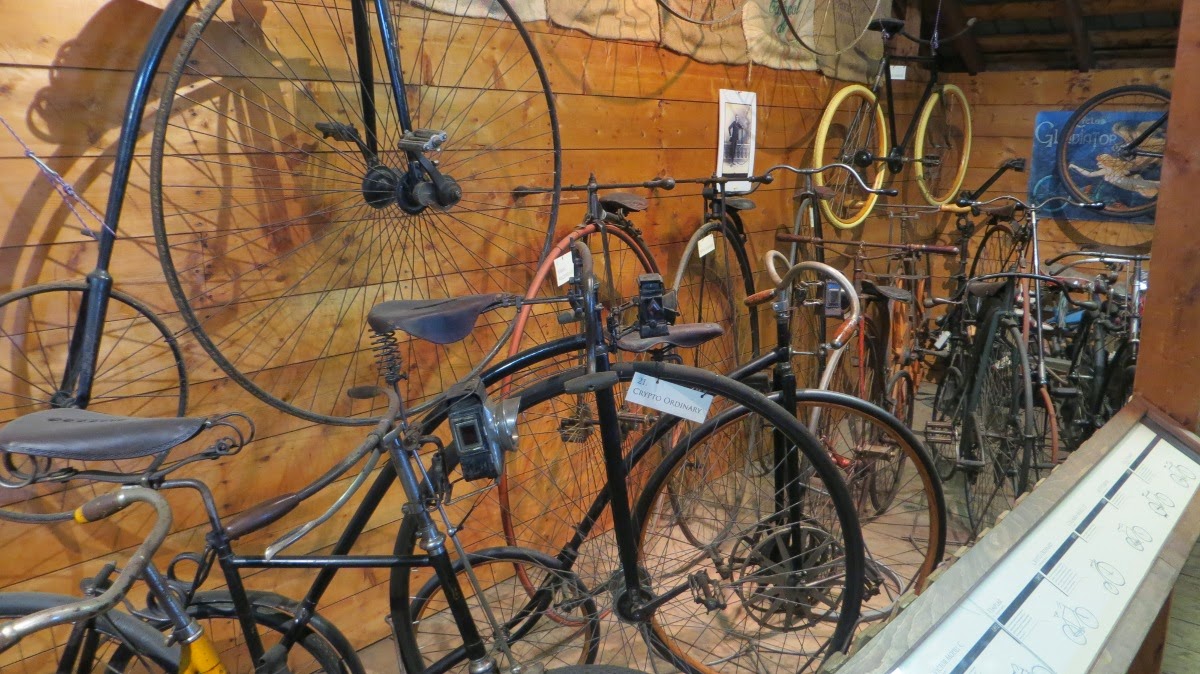 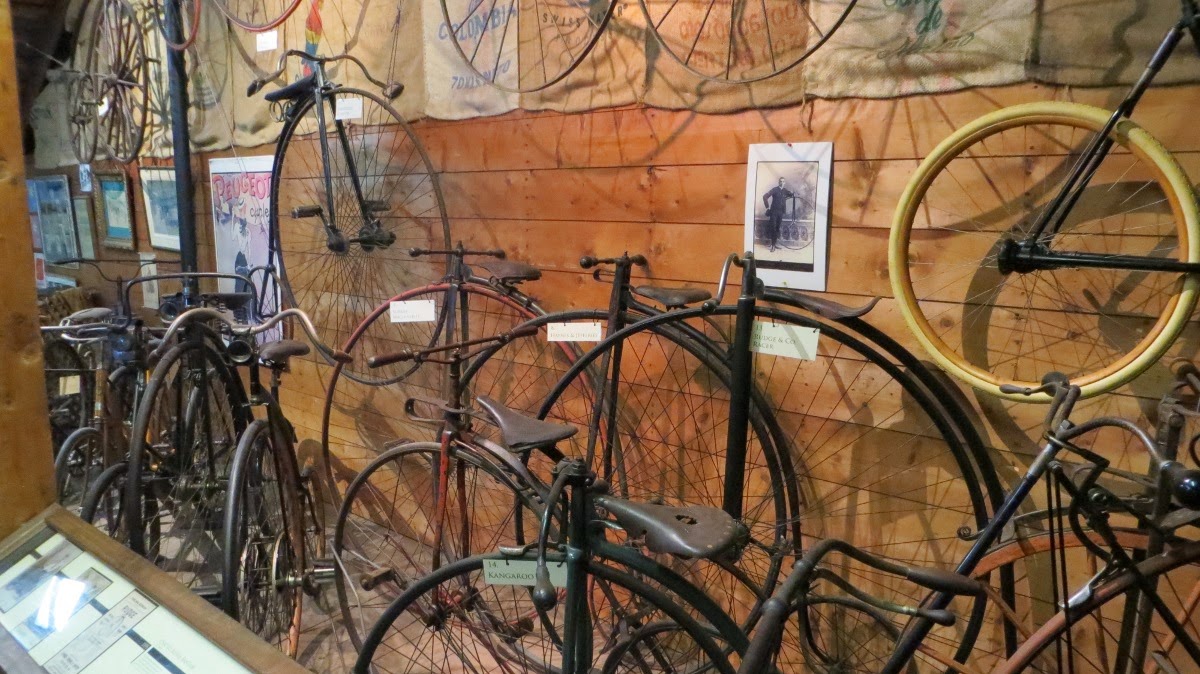 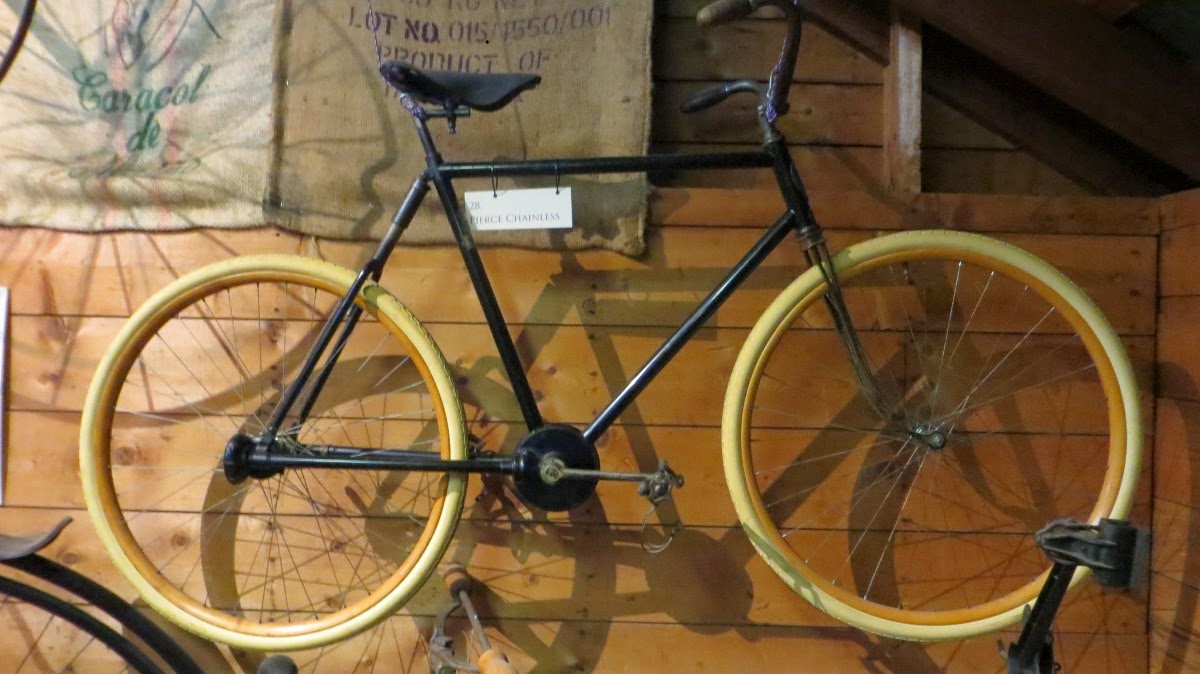 Direct-drive, chain-drive, shaft-drive, wooden spokes, steel-spoked and adjustable spokes, steel frame, wooden frame and aluminum all show the variety of designs that indicate the excitement that the bicycle brought to the masses. 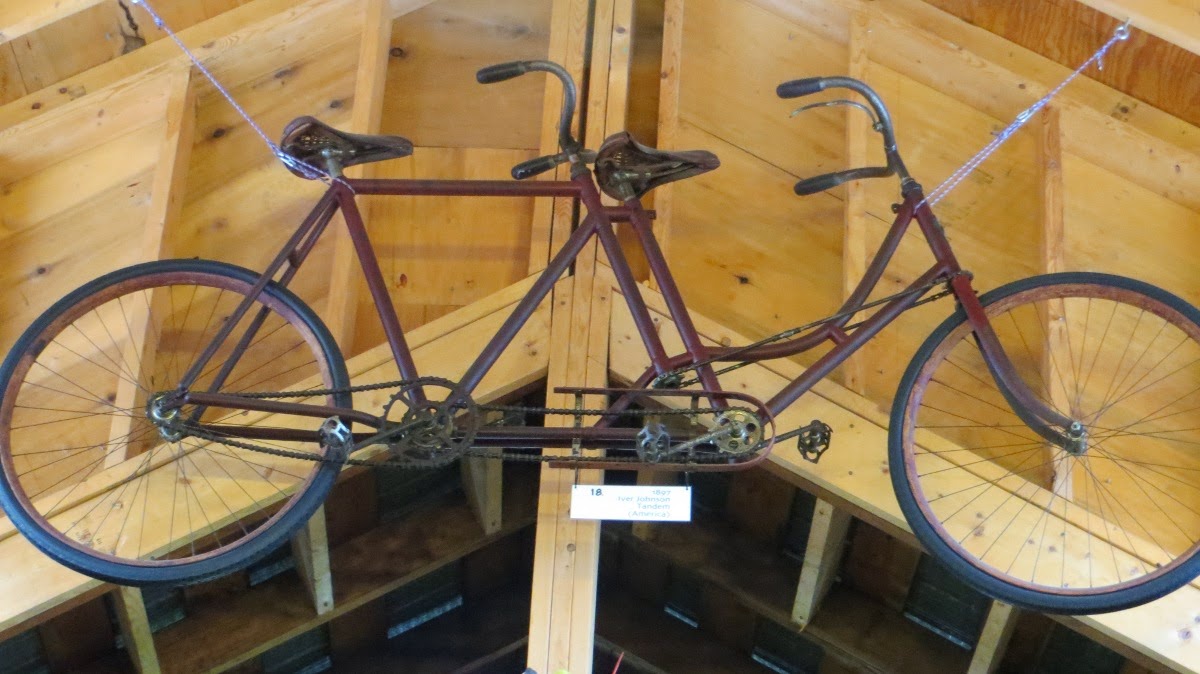 Here was true independence for the masses, for the  first time in human history. The collection also shows that so many so-called "new" designs were first done 100 years ago. 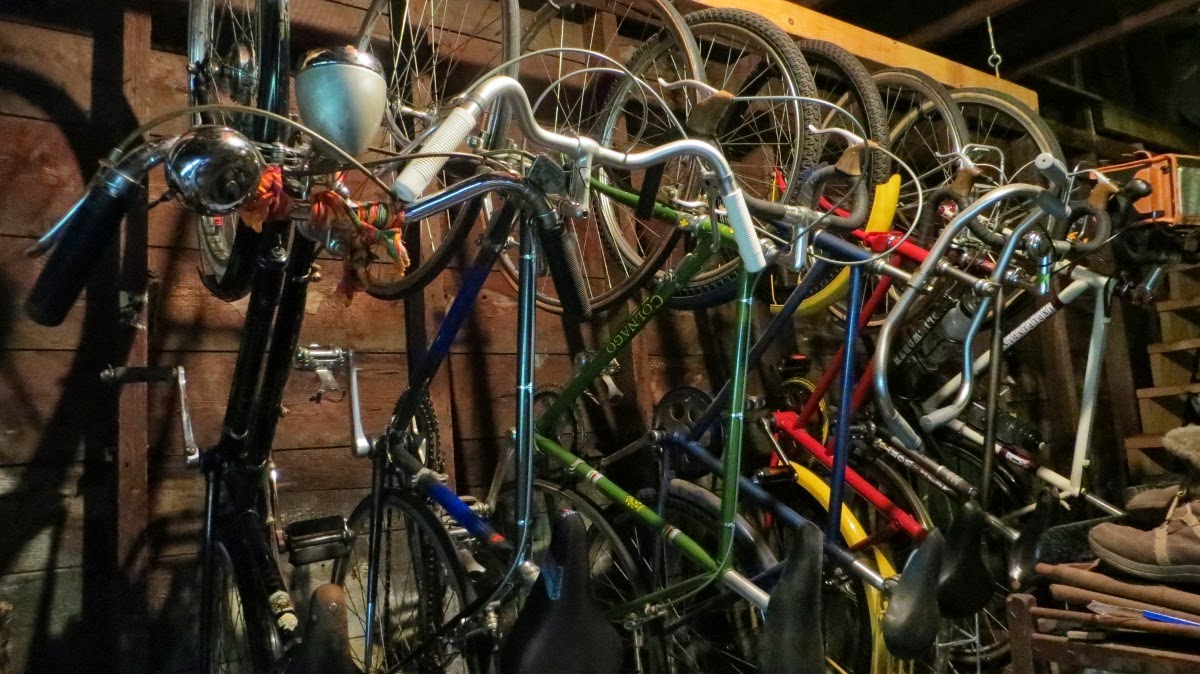 As Glenn said, he never met a bike he didn't like and the more modern part of his collection confirms that philosophy. With names like Hetchins, Masi, and Colnago he has the requisite standards. But then there are the 50s Peugeots, the Raleigh RRAs, the Rotrax, the two Cuban utility bikes and the Bottecchia with a link to Greg Lemond. 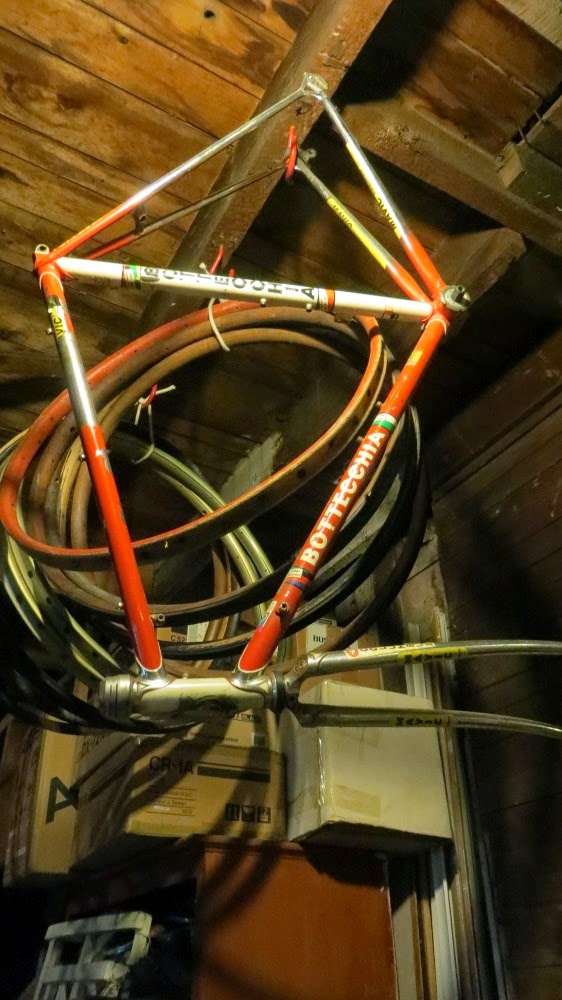 Each bike with its story. Some with a hero and others that echo the bespoke artisans that spent their lives building bicycles. All telling the tale of the rich culture of bike people.
Posted by biciak at 10:30 PM

I met Glenn on a ferry a couple of weeks ago. He was out riding his English made 1896? penny farthing "The New Rapid". He was kind enough to chat and generous in sharing his experience. It was a total joy to hear about the bike and talk about cycling. The bike was an engineering thing of beauty. And to see it so well preserved, cared for and in use was amazing. Best wishes and happy trails Glenn.